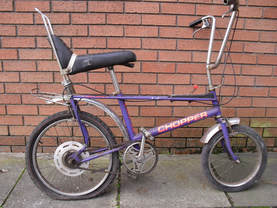 There is no quicker way of identifying yourself as an ignoramus in a bike shop than by asking, "have you got any of the old Raleigh Choppers? They were great bikes".

In my opinion, the Chopper was and is a dangerous piece of junk. The "iconic design" was fundamentally wrong.

There was too little weight on the front wheel so at speeds above walking pace there was a danger of sudden catastrophic speed wobble. The rider would then be thrown from the bike as the fork oscillated out of control. This was known at the time, and reported in the press. Raleigh would have found out about it during prototype testing, yet they still sold it. This speed wobble can happen on any bike or motorbike if the weight distribution is very biased to the rear. Mostly it only happens on badly loaded touring bikes, but the Chopper had it as standard.

The riding position is terrible; it's heavy, and the gear lever is placed to cause genital injuries.

The design is not original, being a copy of various Schwinns.

Correctly dismantled, a Chopper will yield some useful parts. The 3 speed hub is a Sturmey Archer and will be in good condition as the bike will not have done many miles. The headset and bottom bracket are standard Raleigh parts of the time and can be used to repair something worthwhile, like a Wayfarer. Most of the rest is steel and can be recycled. If you cut it up into small bits (something I heartily recommend) it will fit in a council recycling bin. The seat and tyres will have to go to landfill.

The Chopper was a commercial success and has become a "style icon". People think they are good because they look different. In bikes, looking different is seldom good (see: "Innovation"). The point of a bike is to be ridden. Even back in the '70s, Choppers were little ridden and seldom very far. An entire generation was put off cycling by this abomination.

I also assert that the Grifter is rubbish.