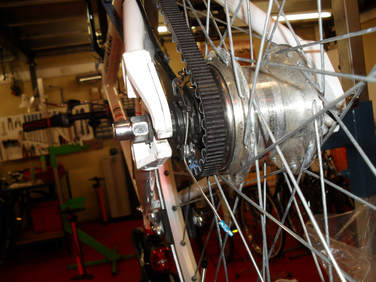 Belt drive: seems like a good idea but isn't.

The advocates claim that it's less messy than a chain and needs less maintenance. It also looks new and modern.

It's not new. It's been used in car engines since the 1960s. It works fine there, under a cover protected from rain and dirt. When fitted to a bike,  it creates more problems than it solves. As the belt is continuous the frame has to have a joint to let it in. The belt is wider than a chain, and has to run perfectly straight. The bike becomes heavier and more expensive. The belt has to run tight, unlike a chain which needs some slack. This puts a strain on bearings not designed for this load.

Belt drive is also less efficient than chain drive. If you doubt this, try to find a racing motorcycle with belt drive.

The problem of chains being oily and messing your clothes was solved years ago by the chaincase.